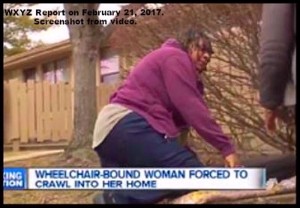 The Fair Housing Center has initiated a fair housing discrimination lawsuit based on disability against Group Five Management Company and TG Properties LLC, the owners of Randolph Court Apartments in Ann Arbor.

Since age 4, Sarah Tankson has suffered from a debilitating neurological disorder known as dystonia. Prior to signing a lease at Randolph Court at the end of 2016, the manager stated in writing that Ms. Tankson would be able to install a wheelchair ramp upon move in.

Ms. Tankson then contacted the FHC in January 2017, after Randolph Court Apartments management threatened to fine her unless she removed her makeshift ramp after each use [see image on left below].

Ms. Tankson and her aide complied by permanently removing the makeshift ramp materials, as it was not possible to stow them after use. As a result Ms. Tankson was forced to remain shut in her apartment or crawl out of her unit on days she required outside care. Ms.Tankson missed many doctor appointments as a result of being unable to safely leave her apartment, which caused the symptoms of her disability to worsen.

The Fair Housing Center asked Randolph Court repeatedly to allow for a more permanent ramp to be installed as a reasonable modification, as well as to allow the makeshift ramp to remain up while a new ramp could be constructed and installed (if approved by Randolph Court).

After repeated denials and road blocks by the housing provider, FHC Cooperating Attorney Steve Tomkowiak filed a lawsuit on March 15th. Only after the filing, as well as media attention by WXYZ Channel 7 Detroit, did Randolph Court permit the ramp to be built. Ms. Tankson is continuing to pursue the lawsuit based on the violation of her fair housing rights, as well as the injuries and emotional distress she endured during the months of stalling to accommodate her disability.